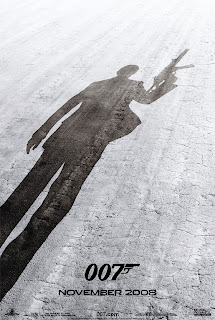 Metro-Goldwyn-Mayer
Columbia Pictures
On the flight to the US, I saw Quantum of Solace (again) as there was not much else worth seeing. I wanted to look at the Atacama desert. The film missed the fact that it has a very important treasure: lithium. See my previous post.

Also a major part of the film was made in Panama and not Bolivia.


Mathieu Amalric played Dominic Greene, the main villain. He is a leading member of Quantum posing as a businessman working in reforestation and charity funding for environmental science. Amalric acknowledged taking the role was an easy decision because, "It's impossible to say to your kids that 'I could have been in a Bond film but I refused.'” Amalric wanted to wear make-up for the role, but Forster explained that he wanted Greene not to look grotesque, but to symbolise the hidden evils in society. Amalric modelled his performance on "the smile of Tony Blair and the craziness of Sarkozy,"          Wikipedia

But the best bit is in the opening sequence:

Judi Dench as M was told: We have people everywhere!!!
Then her bodyguard for 8 years turned on her!!!


Thanks to JULIE MCANULTY: A Tangled Web - Who Knows Who in Private Healthcare 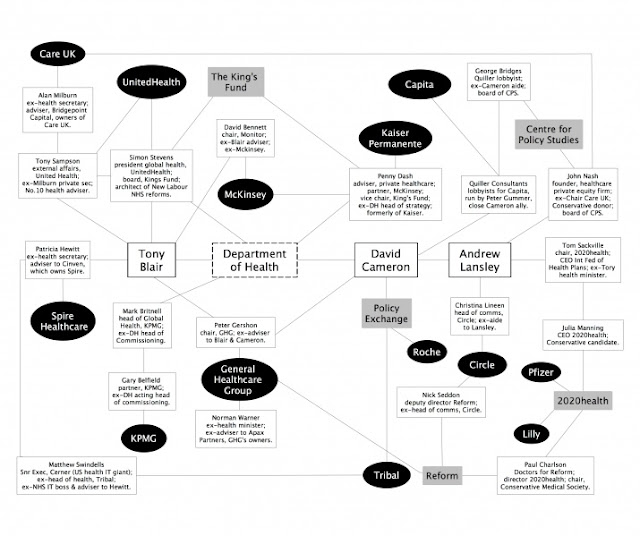 This amazing and alarming graph can be found in'The Plot Against the NHS' by Colin Leys and Stewart Player. (Click on the graph to see it full size.) A version to download can be found here.

Penny started her career as a doctor, training in Cambridge and London, and is a member of the Royal College of Physicians. She trained in public health before going to the United States to study for an MBA at Stanford University, where she was a Fulbright Scholar. While at Stanford she worked briefly with Kaiser Permanente.

Penny returned from the United States in 1994 to work for the Boston Consulting Group in London, leading strategy and change projects with blue chip companies.

In early 2000 she joined the Department of Health as Head of Strategy and Planning, working closely with Alan Milburn in the development of the NHS Plan.

From McKinsey Site:
Most recently, she led the work conducted for the Darzi review of London's healthcare system, and supported Lord Darzi in his national review.

Penny is also Vice-chairman of The King's Fund and Founder/Director of the Cambridge Health Network, a discussion and networking forum for over 500 senior executives from organizations working in health.

From 2004 until 2006 she was a non-executive Director of Monitor, the regulator of foundation trusts.

Prior to joining McKinsey, Penny was Head of Strategy for the NHS, during which time she played a lead role in the development of the NHS Plan.

Interesting that both sites did not use Dr but Penny. Penny was of course the nickname of Moneypenny.

Q 195 Jeremy Lefroy (Stafford) (Con):  I have a couple of questions about the role of Monitor. The first is about the Mid Staffordshire trust into which the Francis inquiry is looking at the moment. It seems to me as the local Member of Parliament that Monitor approved the foundation trust status without going into sufficient detail as to the status of that trust, particularly the quality of care at the time. What assurances can you give us that Monitor’s approval of foundation trusts will be more rigorous in the future than it was in the case of Mid Staffordshire?
David Bennett: Yes. I was not around at the time, but looking at the evidence, the trust was approved at a time when it was not delivering appropriate care to its patients, and that was wrong. Monitor has done three core things in the light of that, all based on an external review of what happened and why, and therefore what lessons can be learned. First, it has set a clear quality bar. That did not exist before—there was no clear definition of what was an adequate level of safe care for any trust to be providing to be authorised. In conjunction with the CQC and the Department of Health, there is now a clear definition of what the quality bar should be.
Q 196 Jeremy Lefroy:  Sorry, are we saying that there was not a clear quality bar for approval of foundation trusts up till now?
David Bennett: There has been for a while, but not at the time of Mid Staffordshire.

David Bennett is the current head of Monitor (a sort of health FSA!) He is not a medical doctor.
David was a Director at McKinsey & Co. In his 18 years with McKinsey he served a wide range of companies in most industry sectors, but with a particular focus on regulated, technology-intensive industries.

We have people everywhere!!!

Hello,
it's Daniele Mannina from Viralbeat. Hope this mail finds you fine, I’d like to have a chat with you about something I believe you could be interested in.
If it is ok with you please contact me at this address: daniele.mannina@viralbeat.com.
Thanks.

Thanks for the heads up, CC. I think everyone should see this graph.