Are we ignoring music, art and literature to the detriment of our patients? Is the answer to psychiatric problems totally controlled by medication, medication and more medication? Or is it selfishness on our part as we may otherwise not see the great works in music, art and literature that some of us do not wish to over-medicate or to medicate at all.
I am grateful to the Frontier Psychiatrist for his:
Interview with poet Sarah Wardle
December 2nd, 2010

Frontier Psychiatrist:
“Sarah Wardle, poet and author of ‘A Knowable World’ recently came to speak at a conference I helped organise.  A Knowable World follow’s Sarah’s detainment in a psychiatric hospital for over a year for manic episodes of bipolar disorder and it received positive reviews from both the British Journal of Psychiatry and the Guardian newspaper. I would also recommend it as her poems offer an eloquent glimpse of experiences that are relatively rarely documented.”
“……Apart from a few at the beginning and end, written before and after, most poems were written on the wards, for example one that begins, ‘The consultant psychiatrist is on the ward./ In his proximity all is hope with the world’.  Others were responses to the daily round of fire alarms and PRN, to snow seen on Easter Sunday from a ward window, or to a fellow patient’s suicide.  The opening poem describes the MRI scan that prompted a previous psychiatrist, Professor Basant Puri, to take me off medication and put me on fish oil.  The closing poem describes walking up Ben Nevis and celebrates being out in the open again.  Writing was a lifeline for me and I was heartened to receive in hospital acceptances from journals, such as The Times Literary Supplement, for poems written on the ward…….”  Read more>>>> 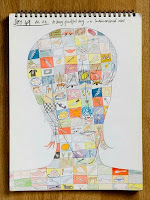 Bobby Baker is a successful performance artist who had suffered acute psychiatric problems including self harming, which she captured over a period of 10 years in hundreds of 'diary drawings'. These paintings (158 drawings, selected from a total of 711) and commentaries demonstrated her anger with the mental health service and any viewer thinking of entering psychiatry might be put off forever.

Bobby was told by the first psychiatrist she saw that she suffered from borderline personality disorder. (Time article link)
As her story unfolded in her drawings, one gets an uncomfortable feeling about the state of our psychiatric service and wonders if we are even at the 50th step. She has triumphed over some of life’s most frightening experiences despite all.
“As my ability to function improved, hell became more firmly encased in my skull. I’ve formed the opinion…..that psychosis is a metaphor for extreme suffering. My delusions led to paranoia that a network of professionals was constantly searching for evidence that I was wicked. …….Medication didn’t help – it just made me fatter and fatter.”           Bobby Baker     Wellcome Collection Exhibition pamphlet.
More>>>>

“Her theory is that nowadays people uncomfortable with sadness that German romantic poets and the characters they wrote about would have been medicated out.
Yes, there is so much sadness and melancholy and suffering in the Goethe poems which Schubert set to song. It is of course a form of sublimation and in psychiatry most would agree it is also the best psychological defense mechanism.”
Link:
Frontier Psychiatrist
Related:
Lithium Bipolar and Nanking
Sadness & Songs: Superstition & Mahler
The Cockroach Catcher on Amazon Kindle UK, Amazon Kindle US
Posted by Am Ang Zhang at 4:18 PM

It is really a hearth touching story that a person who is suffering form mantel illness and became an artist.