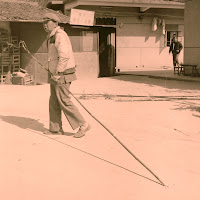 As the cock crowed, the grandfather left the house on his half mile walk to the little park by the river for his morning Tai Chi with a group of seniors. He was in fact the leader of the group and it fell upon him, a young looking 83 year old to go through the sequence of Tai Chi moves that had been passed down by his grandfather and others before him. His wife sometimes accompanied him but today she had to baby sit the grand-children as their parents were on an early shift. When they finished they sat around for some social chat and drank green tea from their thermal flasks. He walked home refreshed from the morning’s exercise and social gossips. As he neared home he could hear his grand-daughter practicing the piano. What lovely Mozart! He stepped into the house to find his grandson busy at a Nintendo game.

“Why aren’t you practicing your violin? If you just play computer games, your brain will turn into water.”

His grandson shut down the Nintendo, “Grandma, you should try it some time. It will be good for your brain.”

“I am too old for it. My brain is all water anyway, according to grandpa!” She just remembered that she had to take her Ginkgo capsules.


The grandson played some scales on the violin and then the Vivaldi A minor. From memory, as that was how he was trained. 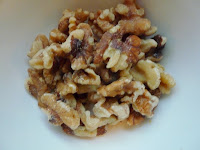 Grandma now cracked some walnuts while grandpa got ready to go to the market to see what fresh fish he could buy that day. The walnut was to go with their home reared free range chicken. They grew their own vegetables too.

Later that day they would be having a good game of Mahjong with a retired couple.

Much of what they did would help to maintain their brain fitness.

Ginkgo biloba with its romantic botanical history is no longer the Dementia buster it promised to be. (Those who know of the village in Japan where there are loads of Ginkgo trees could have told you that. The village has the highest Alzheimer rates in Japan.)

I was reminded of Woody Allen’s film, Radio Days, where the young Allen (who else) was brought before the Rabbi by his mother for his advice because Allen was hooked onto the radio. The Rabbi’s skepticism was perhaps not that dissimilar to ours nowadays about iPhones, computer games and brain exercises. Indeed the young Allen should be concentrating on his upcoming Bar Mitzvah and the Torah memorizing.

The Old views on Brain.

When I was training in London in the 70s, I spent some time at Queen Square. Those in the know will recognize it as the place for neurology this side of the Atlantic. It was drilled into us then that sadly we were given a number of brain cells when we were born and it was all downhill from then on or something to that effect. It was well known that neurologists were great diagnosticians but for most neurological conditions, not much could be done. How depressing indeed. Even as recently as four weeks ago, I heard a young doctor told his father that there was nothing he could do with his brain cells. One is given so many at birth and no more can be expected. Lord Brain (1895-1966) would have been so proud.

Yet it was also London that shook the world with new discoveries about the brain, and the study was on the most unlikely group of people: Taxi drivers. Their “KNOWLEDGE” was the basis of our knowledge on brain plasticity today. The “KNOWLEDGE” is a term officially used to describe the test the Taxi Drivers had to take to get the licence to drive Taxis in London. Streets in Londonhave evolved over time and are not on any grid system at all. Early postmortem examinations led some pathologists to note the small size of the Taxi drivers’ frontal lobes. Yet actual weight measurement showed that size was all relative. It was the enlarged hippocampal region that created that impression. Later work using modern scanning techniques confirmed the early impressions.

If two to four years of “KNOWLEDGE” acquisition can change the size of the brain in a grown adult, what else could we do?

The rest, as they say, is history.

The SharpBrains Guide To Brain Fitness


The book covers the changes to the brains of musicians and medical students. It tells us that just three months of memory work can have noticeable effect on the brain of medical students, and music memory work has similar impact on musicians. I was pleased to learn that Bilingualism helps too. From infancy, I and my siblings were brought up with speaking two Chinese dialects at home.

Did the 300,000 or so that took up piano this year in China know a thing or two about brain plasticity? Currently 30 million children are reported to be learning the piano in China.

As a child psychiatrist, I find the ones on ADHD showed great promise but I doubt if we are ever going to see the end of the stimulants’ hold on the condition in the West. It is interesting to note that Stimulants never took off in China, a country with a fifth of the world’s population. Computer games, on the other hand, have really taken off there.

Bridge and Sudoku were mentioned in passing, along with other favourites like crosswords. There is no mention of Mahjong although in the East it is all the rage, nor the memory work required in some religions. Their gods might know a thing or two about the brain.

Interesting article, CC. I remember reading the Nun Study about this and about taking up music and so on helping the memory. I think there's something in it and my experience of the Chinese has taught me that they have a much healthier lifestyle than the West. However, I do always bear in mind my mother who had Alzheimers. She was someone who was very social, always doing new things and who learned several languages and a crossword fiend, yet she got it. There's a lot of things we still don't know about it and in our family it does seem to be hereditary; my grandmother and two of my aunts on my mum's side had it. I'm hoping I take after my dad for this.

I wish I had the answer. Certainly the avoidance of fat and the use of Statins can be devastating as I have witness it in a close friend.