The early part of the 20th Century was a time of great spiritual, intellectual and artistic upheaval in Western Europe. In Vienna, Arnold Schoenberg and his pupils Anton Webern and Alban Berg, whose music we will hear in the second half of tonight's Prom, were rewriting the rules of classical music. Sigmund Freud was practising psychoanalysis in Vienna, and Jung was developing his theories of analytical psychology; the two worked closely together for several years.
Europe was heading for the First World War and on the eve of the war Jung had an almost catastrophic spiritual crisis which led him to enter in to a long and complex period of self-analysis.

Jung recorded his psychological experiments on himself in a beautiful manuscript which he called Liber Novus (the New Book). Bound in red leather, it became known as the Red Book.

The Red Book as covered by The Cockroach Catcher in two posts: 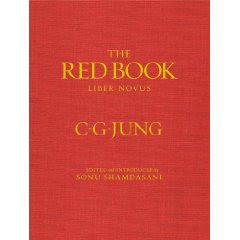 "This is a story about a nearly 100-year-old book, bound in red leather, which has spent the last quarter century secreted away in a bank vault in Switzerland. The book is big and heavy and its spine is etched with gold letters that say “Liber Novus,” which is Latin for “New Book.” Its pages are made from thick cream-colored parchment and filled with paintings of otherworldly creatures and
handwritten dialogues with gods and devils. If you didn’t know the book’s vintage, you might confuse it for a lost medieval tome."

"And yet between the book’s heavy covers, a very modern story unfolds. It goes as follows: Man skids into midlife and loses his soul. Man goes looking for soul. After a lot of instructive hardship and adventure — taking place entirely in his head — he finds it again."  Read more >>>>>>>>
C. G. Jung: The Red Book
W.W. Norton & Company

I wrote in my book:
“……But Miss Horowitz you cannot fault. Her father was a famous child psychiatrist and she was really an Anna Freudian. Not so much of the penis envy or bad breast good breast stuff that Gail kept talking about……”
Miss Horowitz was my psychotherapy supervisor. We spent an hour and a half every week talking about my patients. It was years later when I realised the essence of her approach and therefore that of Anna Freud’s is the naturalness.
Much has been written about Sigmund Freud as a person with what looked like unresolved personal problems.He had without doubt influenced our thinking for at least thirty years as the Nobel Laureate Kandel conceded.He provided a framework for our further understanding of the working of the human psyche. Much as physical medicine is being continually updated by newer findings based on new scientific discoveries, later psychiatrists have been able to modify and improve upon Freud’s original ideas. I always view with suspicion the rigid adherence to classical ways in matters of the mind.
At the time when I was working at the Tavistock, Anna Freud (December 3, 1895 - October 9, 1982, sixth and last child of Sigmund and Martha Freud) continued to give seminars on Wednesdays at lunch time at her home opposite the Hampstead Clinic. This is now the Freud Museum. Anna Freud herself would already have been seated even if you made special effort to arrive early in order to have a seat. She would invariably be knitting and the few times I was there she seemed to be knitting this enormous scarf or even blanket. It spread over her knees and the floor in front of her as if to say “This is my space.”
Arthur Couch, who had 6 ½ years of psychoanalysis with Anna Freud, wrote a paper to try to give a picture of Anna Freud's views about adult psychoanalytic technique. The following excerpts gave particular insight:
“……She seemed not to know the orthodox 'Freudian' rules of technique about such restrictions. At times she even expressed her own opinions on certain realistic issues I was talking about. I recall telling her I was surprised that she should say such things; she answered : ‘Why are you surprised?’ …… I came to realize that I had previously assumed something too rigidly limited about Freudian clinical principles…….”
“……As I recounted these various failed attempts each day, Anna Freud seemed to increase the intensity of her knitting, which she did most of the time so silently that I hardly noticed it. Finally, in one session, she began to speak about the issue of my soft-spoken patient. I expected her to give a very important interpretation about my difficult situation. But what Anna Freud simply said was: ‘Tell her to speak up.’ This I did, and it solved that particular problem for the rest of a long analysis……”
“………Erikson's wife was pregnant, and he was spending many sessions talking about his worries about her pregnancy and what having a baby meant to him. Being very involved with this topic and wanting his analyst's full attention and concern, Erikson expressed his irritation to her that she was not speaking about it, but Anna Freud just kept knitting with increasing intensity while remaining silent……. when Erikson came into his session and announced that his new baby son had been born, Anna Freud gave him a blanket she had been knitting all along for his baby……”

Anna Freud once said: “The trouble with common sense is that it is so uncommon.”