The Cockroach Catcher was on Cable Beach in Broome, Australia and found a creature he has never come across before and put the picture on Facebook. Luckily within a few minutes the answer came from his friend who generally knows most birds and plants. I raise my hat to him for knowing this: Chiton. 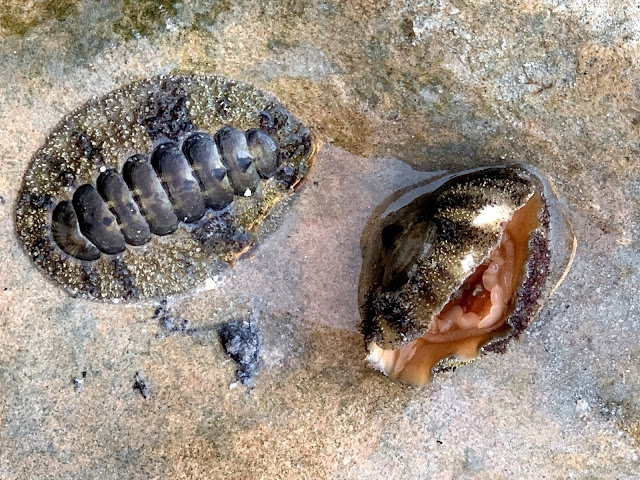 © 2018 Am Ang Zhang
I did some research and what I found was most interesting:
Chitons:
Chitons may be found mainly in the littoral surf zone. About 750 species of this primordial mollusc class are known today. The largest one is Cryptochiton stelleriwith 33 cm (about 14 in.), living on the American north western coast.
In colloquial language, chitons are also called coat-of-mail shells, their shell resembling the segmental armour on a knight's gauntlet, though, as we shall see later, the shell of a chiton is not segmented in the biological sense of the word.
Not only chitons' shells are hard. Chitons, like snails, possess a rasp tongue (radula), which they use to rasp food off the ground, if they are not among the few carnivorous species, such as Placiphorella rubra

Then from : The Secrets Hiding in the Simplest Animal Brains

Chitons don’t have anything we’d generally consider to be heads, and it’s long been thought they don’t have brains, either, and instead sport a rudimentary, ladder-like nerve network. Sumner-Rooney and Sigwart argue in their paper that chitons aren’t really brainless, but rather have a brain that defies our expectations and understanding.

Then from Harvard: Creating a new vision for multifunctional materials.

Most eyes in nature are made of organic molecules. In contrast, the Chiton’s eyes are inorganic and made of the same crystalline mineral called aragonite that also assembles the body armor. They enable the Chiton to perceive changes in light and thus to respond to approaching predators by tightening their grip to surfaces under water.

Using a suite of highly resolving microscopic and crystallographic techniques, the team unraveled the 3-dimensional architecture and geometry of the eyes, complete with an outer cornea, a lens and an underlying chamber that houses the photoreceptive cells necessary to feed focused images to the Chiton’s nervous system. Importantly, the researchers found that aragonite crystals in the lens are larger than in the shell and organized into more regular alignments that allow light to be gathered and bundled.